Guatemala is among one of the most spiritual places in the world. But the country is also special for its rainforests and the Mayan Ruins in Tikal. Located in Central America it forms part of the isthmus that unites North and South America. Due to its location and its subtropical climate it is a pleasant destination to visit all year around.  Guatemala has 37 volcanoes with three active today. The mountain system that goes across the country forms the highest non-volcanic mountain range in Central America, the Sierra de Los Cuchumatanes and the smaller one being the Sierra Madre. In these mountains there are more than 300 eruptive points. Visitors to Guatemala will find lakes, mountains, volcanoes, colonial cities, colorful markets, forests, beaches and a lot of culture.

Antigua Guatemala is among the best conserved Colonial Cities in the world. It is a busy town and the former capital of Guatemala. Destroyed by an earthquake, it was abandoned centuries ago and then repopulated around the turn of the last century. Today it is Guatemala’s main destination with more than 30 monastic orders which built impressive monasteries, convents and cathedrals. The town center is now a UNESCO World Heritage site.

Tikal National Park is located in the North of Guatemala and you will see the most impressive Mayan Temples. Tikal National Park was the first mixed UNESCO World Heritage Site. Tikal is an ancient city with partially restored Mayan ruins surrounded by rainforest. People can have as base the Island of Flores, located on the lake Itza, and travel to different Mayan Cities smaller than Tikal but also impressive and located in the rainforest.

Other Mayan cities you can visit nearby: Piedras Negras, Uaxactun, Ceibal, Aguateca, Yaxha, Topoxte, and El Mirador. El Mirador can only be reached by helicopter since there is no road to this recently discovered site. As a curious fact: the Maya civilization of El Mirador in Guatemala’s Peten developed the world’s first superhighway system well before its collapse in 150 BC.

Panajachel is the gateway to Lake Atitlan and the many villages surrounding the lake. This bustling town is located on the Northeast shore of Lake Atitlan, in the Guatemalan highlands.  Panajachel is a good base for visitors crossing the lake to visit other towns and villages. It also has the best view of the lake since you can see the three volcanoes as a backdrop.

The market in Chichicastenango, held every Thursday and Sunday, is the biggest market in Central America. It is full of color and culture, and here people from the highlands of Guatemala get together to sell pottery, flowers, wooden boxes, food, and handicrafts, clothe and condiments. You can also see the Santo Tomas Church where Catholic and Mayan rites unite. Located at just 45 minutes from Panajachel and about 3 hours from Guatemala City, Chichicastenango is a must see if you want to see the Indigenous culture and the most amazing landscape of Guatemala.

The Caribbean Coast line is very short with white sand beaches and calmed waters. The town of Livingston offers unique Garifuna culture or you can sail through the Rio Dulce River. Start your visit with a visit to San Felipe de Lara castle, built to stop pirates entering Lake Izabal from the Caribbean when Guatemala was an important shipping staging point. You will also see flora and fauna of this part of the country from the boat and you can stop on the way on the caves and the hot spring for a quick visit. 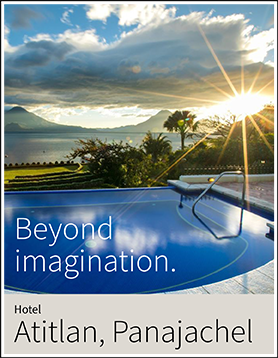